Sachin volunteered to bat at No.4 so that Sehwag can open in ODIs: Former India keeper Ajay Ratra 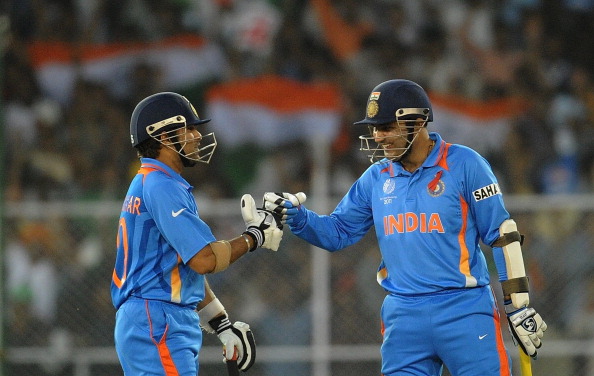 Former India wicket-keeper batsman Ajay Ratra believes the credit for Virender Sehwag’s promotion as an India opener should be shared between former captain Sourav Ganguly and the legendary Sachin Tendulkar.
“Sachin was doing so well as an opener at that time but Sehwag had to open. So Sachin offered to bat at No.4. Sehwag then opened with Dada (Sourav Ganguly) for that left and right combination. If Sachin hadn’t agreed then Viru probably would have had to bat lower. He wouldn’t have got the chance to open in ODIs and the story could have been a lot different,” said Ratra in an exclusive chat with Hindustan Times.


Ganguly was kind of forced to come up with an out of the box idea of opening with Sehwag in 2001.

Tendulkar was out with an injury and India’s back was against the wall after losing the first couple of matches of the tri-series to Sri Lanka and New Zealand.

The experiment of Yuvraj Singh or Amay Kurasiya at the top fell flat on its face and Sehwag’s returns in the middle-order, a position in which he had batted his entire life for Delhi including age-group cricket, were unsatisfying, to say the least.

July 26, 2001, against New Zealand, India’s third match of the tri-nation series was when Ganguly decided to play the gamble. Sehwag was promoted to open the innings in an ODI for the first time.

India lost that match too as they failed to chase a below par total. The hard hitter from Najafgarh scored 33 runs off 54 balls, the highest score of India’s innings.

After two more failures at the top, Sehwag scored a blistering 70-ball hundred to guide India to victory against the Kiwis.

But the problems for India had only begun. Sachin was back for the next tri-series in South Africa and Sehwag was demoted to the middle-order.

Sehwag was back opening the innings midway through the six-match home series against England, where Ratra also made his ODI debut as India’s wicket-keeper. Scores of 51, 82, 42, and 31 against England were enough to show Sehwag’s mettle as an opener.

All this while, Sehwag was opening with Tendulkar and Ganguly was batting at No.3. The left and right combination of Ganguly and Tendulkar did wonders for India for the last three-four years. A sensible thing would be to at least maintain the left-right combo if not the same pair. But who would ask the world’s best batsman to bat down the order?

“Sachin took a different role. He volunteered to bat at No.4.He did it for the side. His role was then to bat till the 45th over. And the move worked, Viru became so successful at the top,” said Ratra, who was part of the Indian side when all the transition at the top was taking place in 2002.


Sachin started to bat No. 4 in India’s tour to the West Indies with Sehwag opening the innings with Ganguly.


The same combination continued in the NatWest tri-series in England, which India won by beating the hosts in the epic final at Lord’s and even in the Champions Trophy in Sri Lanka, which India were the joint-winners of, along with the hosts.