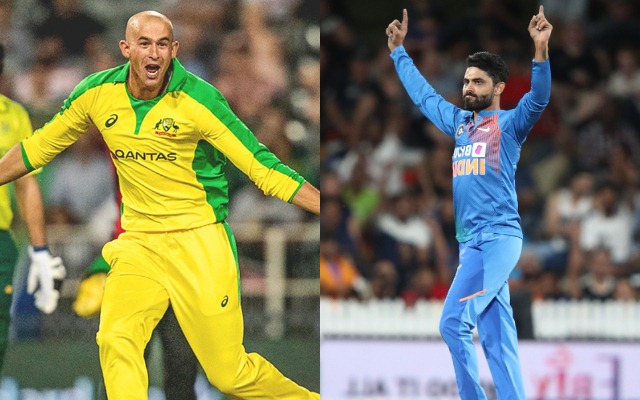 After taking five wickets in the first T20I of three-match series against South Africa, Australia spinner Ashton Agar said that he aspires to become like India's Ravindra Jadeja.

He became the second Australian to take a hat-trick in T20Is. It was not that easy to outsmart South African batsmen in three successive balls but Ashton Agar made it look easy.

In the match, Agar also took a hat-trick and became just the second Australian to achieve the feat in the shortest format of the game. As a result, Australia thrashed South Africa by 107 runs.

Both Agar and Jadeja and are similar in nature. Just like Jadeja, Agar is a left-arm spinner who is more than a handy batsman at No.7. Fielding perhaps is the only department where Jadeja will score higher Agar but the tall Aussie is ready to improve.

Agar said with ESPNcricinfo, "I had a wonderful chat with Ravindra Jadeja after the India series. He's my favourite player in the world - I want to play cricket like he does. He's an absolute rockstar: smacks them, gun fielder, and spins the ball.

He added, But it's just his presence when he's out there, watching his confidence... just talking to him about spin bowling, keep trying to spin the ball. When he's batting he has a really positive attitude, and he takes that attitude into the field as well.