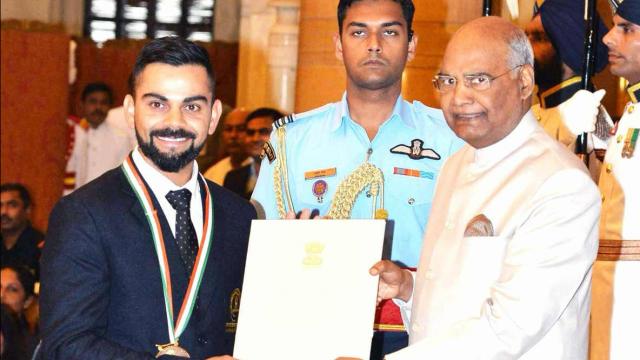 Virat Kohli was in the ceremoney with mother, Saroj Kohli and his beautiful wife, Anushka Sharma. he became the third Indian cricketer, who got after Sachin and MS Dhoni.


Virat Kohli received the Khel Ratna after Sachin (1997), MS Dhoni (2007). BCCI had recommended Kohlil for the past three years but in 2016 he missed out owing to the Olympics where the award went to wrestler Sakshi Malik, Shuttler PV Sindhu and gymanast deepa Karmakar.

Award ceremony was postponed to Sept 25 form the Usual August 29 national Sports day event , this is due to clash of the dates with the Asian Games in Jakarta.

Spectacular and most outstanding performance int he field of sports by a sportsman over a period of fours years, Both Kohli and Chanu received a medal , a citation and cash prize of Rs 7 Lakh.

Email ThisBlogThis!Share to TwitterShare to FacebookShare to Pinterest
Labels: Cricket